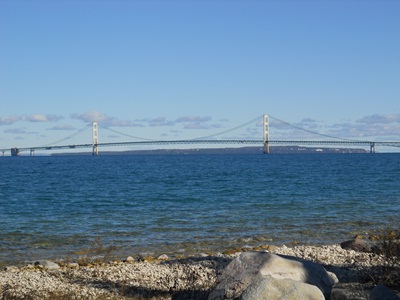 The Headlands, a beautiful 550-acre park just west of Mackinaw City, is one of six International Dark Sky Parks in the U.S. and one of nine in the world. Named a Dark Sky Park in May 2011, this designation means that The Headlands is a spectacular place for sky and star gazing.

A Dark Sky Park has minimal light interruption from nearby cities or places making it a perfect place to view the skies at night. The approval required a lengthy process by Emmet County, who owns and operates the park. As an official Dark Sky Park, the only one in Michigan, The Headlands must be open at all times and include an educational component about astronomy and maintain park lighting that is minimizes interference with star gazing.

The nation's other Dark Sky Parks are in Utah, Pennsylvania, Washington, Ohio, and New Mexico.

advertisement
The Headlands contains two miles of pristine Lake Michigan beaches, rare and endangered plant life, and wild life including bald eagles and osprey. Trails through the park offer the opportunity to view the plant and wild life.

June 20 The Cycle of the Year as a Breathing Process. Sun and Moon will balance the visible horizon at this year’s Summer Solstice, with Full Moon rising in the East as the Sun, at Solstice, sets in the West. Come celebrate the mystery of it all, either just for the actual Solstice moment at 6:35pm for sunset and moonrise at 9:32pm, or for the whole evening.

July 1, 8, 15, 22, 29, August 3, 12,10, 26, and September 3, 8:30pm Starlight Family Trivia Night. Fridays throughout the summer, starting July 1 (and unless there is a formal program scheduled) join us at the shoreline viewing area with your favorite team of family and friends for Starlight Trivia, designed to test and delight your knowledge of the stars! In the event of inclement weather, Starlight Trivia will take place at the Heritage Village Pavilion, across the street from Headlands main entrance.

August 12 Lights Out and the Perseids Picnic. The brightness of First Quarter Moon doesn't stand a chance against local enthusiasm for Lights Out under the Perseid Meteor Shower. Join us for an evening of counting falling stars as the lights go out around Northern Michigan to celebrate the night sky! Headlands Dark Sky Park.

advertisement
September 17 Harvest Festival Dance. Come dance with us in the Headlands Festival tent to celebrate the season with live music under light of the Full Harvest Moon! Performing will be the renowned Jill Jack Band!

November 18, 10pm Friday Night No Lights for the Leonids. It is the peak of the lion's meteor shower, and you are invited to join the Headlands Dark Sky staff for a beautiful night under starry skies.

December 19, 5pm Snowshoe Hike Through the 12 Days of Christmas. The last New Moon of 2016 occurs during the sacred season of days that bridge the old year to the new, allowing for unique contemplation of where we’ve been, and where we’re headed. Limited number of snowshoes available by reservation at 231-348-1713 (it's best to bring your own).

Hop aboard for a wonderful night out under the stars and experience the beautiful Straits area while enjoying an entertaining evening listening to Mary Stewart Adams, Program
Director of the Dark Sky Park at the Headlands, discuss sky lore and celestial events in our night sky. It’s a wonderful way to spend time star gazing out on the water!

For more activities & attractions, check out these additional links for Things to Do in Northern Michigan: